We are proud to announce the release of Gazebo 11. This version of Gazebo has long term support with an end-of-life on January 29, 2025.

The first stable release of Gazebo came out on October 2012. Now, almost 8 years and 10 major releases later, Gazebo 11 marks the end of major releases from the osrf/gazebo codebase. All released versions will be supported until their end of life, receiving backwards-compatible features and bug fixes.

We'd like to thank external developers who have contributed to Gazebo over the past year:

Moving forward, the simulation team at Open Robotics will be focusing on the development of the Ignition simulation framework.

Both Gazebo and Ignition use SDFormat as the world description format. Therefore, worlds and models that work on Gazebo can be easily ported to Ignition.

Ignition Gazebo supports different plugin types from Gazebo-classic. Check out this tutorial for a review of plugin types and an example on how to port a plugin from Gazebo.

Improved migration guides and APIs to help the transition from Gazebo to Ignition will be coming up over the next few months.

Following quickly on the heels of the Ignition Acropolis release in February 2019 comes Ignition Blueprint. This release took place over the last couple weeks of May, and offers a few new features including:

PBR allows simulation models to gain a marked visual improvement. This will benenfit both human observers, and image-based sensors. Mouse over the following image to see the difference between a scene lacking PBR and a scene with PBR. 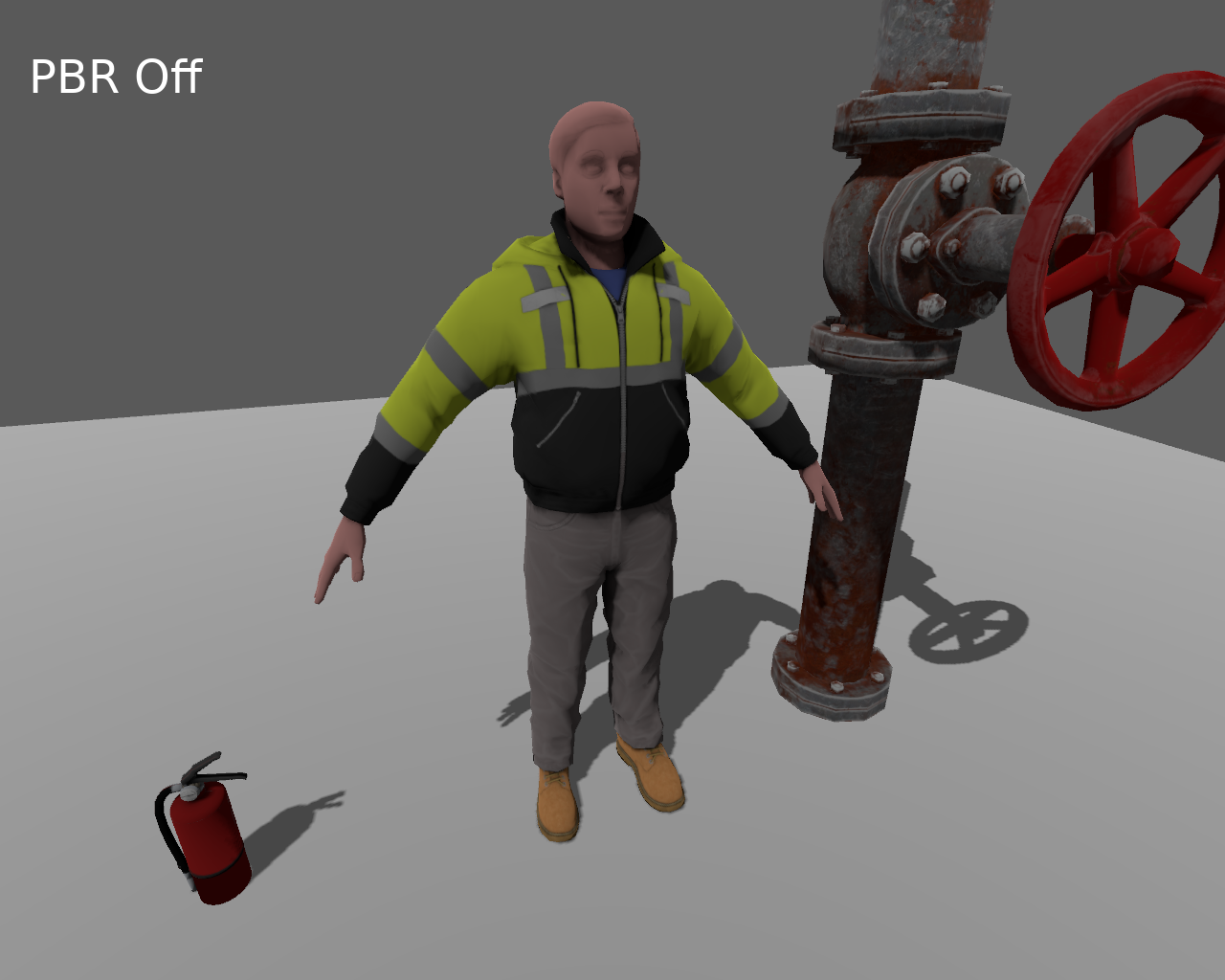 T-shirts commemorating the Blueprint release are available. Show your support and get your t-shirt at:

We'd like to highlight a particular contribution that began back in February of 2017. Martin Pecka created pull request #2652, which added support for tracked vehicles in Gazebo. Take a look at the video below for a short demonstration.

Another long standing pull request that has been recently merged is pull request #2058, created by Carlos Miguel Correia da Costa back in December of 2015, which added support for camera intrinsics parameters in Gazebo.

A model of the Edgar Experimental Mine has been created for use in the SubT Challenge. This model will also be useful to anyone interested in underground robotic applications.

We are proud to announce of release Ignition Acropolis. Please read the complete post about the release here

The latest release of Gazebo, Gazebo 10, was rolled out in January 2019. We plan to continue to support Gazebo over the coming year and release Gazebo 11 in 2020. Gazebo 11 will be an LTS release, with a EOL date of Jan 2025. Gazebo 11 will also the be final release of the Gazebo lineage. Development efforts toward simulation will focus primarily on Ignition. Users of Gazebo can expect migration guides, tutorials, and additional help to be developed over the course of 2019 and 2020 to aid in the transition.

Over 16 years of experience has helped to inform and guide the development of Ignition. We believe that the shift toward Ignition will be extremely beneficial to community. As always, this remains an open-source project and we look forward to your feedback and contributions.

Libraries within the Ignition Robotics framework have been under development for a few years now. For example, Ignition Transport was started back in 2014. Ignition Robotics is now ready for a unified release, which would consist of a curated and compatible group of library versions. This first major release of Ignition Robotics will arrive in February 2019.

No new contributions merged into Gazebo or SDFormat this month.

A generic quadcopter and hexacopter are available for use in simulation. These models are used in SubT, and can be controlled the using the RotorS package.

The DARPA Subterranean Challenge has officially kicked off. You can find out more information, including how to register, at subtchallenge.com. Over the next few years Open Robotics will be supporting this challenge and significantly improving simulation along the way.

The improvements to simulation are taking place in the Ignition Robotics project. We have our first major release of the project in February 2019. This release is set to include our new plugin-based physics and rendering systems, an updated graphical user interface based on Material Design, and support for distributed simulation. The goal of Ignition Robotics is to improve the usability, scalability, and flexibility of Gazebo while maintaining or improving Gazebo's current level of simulation fidelity.

Given the resources of Open Robotics, we have to make trade-offs in our development and maintenance efforts. Gazebo10, to be released in January 2019, will be the last major version of Gazebo based on the code in bitbucket.org/osrf/gazebo. A new version of Gazebo, based on the Ignition libraries, will be part of the Ignition Robotics release in February 2019. We will continue to support older versions of Gazebo including versions 7-10 through their planned EOL dates which reach out to 2023 for Gazebo9.

We'd like to thank the following people for their contributions to Gazebo.

Collections have been added to Ignition Fuel. A collection is a grouping of models. We have started a Collection for the Subterranean Challenge that consists of various robots, sensors, and environments. Take a look at ignitionfuel.org/nate/collections/SubT Tech Repo.